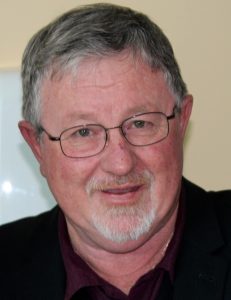 Rod left home at the age of fifteen and spent the next 6 years caught up in the criminal and bikie scene in Sydney, Australia. During these years he had a heroin addiction. In 1973 Rod found himself in an Ecumenical Christian Community and gave his life to the Lord on Good Friday 1974.

He lived in the Community until 1978 when he gained employment working with State Ward Children as a Youth Worker. In 1980 Rod completed a full time Diploma in Spirituality with the Catholic Church and in 1984 began studying for the Anglican Ministry and was Ordained in 1986. Rod served as a Parish Priest for 8 years before beginning full time Prison Chaplaincy in 1993.

Rod and Lee were married in 1981 and they have three children and in July this year their first grandchild was born. Lee is a school teacher.

With the support of the Corrective Services NSW, Rod agreed to be the Co-oordinator of IPCA VII, and was elected Worldwide President at this conference.

Rod Moore in the News

There but for Fortune (Radio broadcast The Spirit of Things audio file). Rod, along with four other Prison Chaplains and a District Judge (and former Catholic priest) is interviewed for a show on ABC Radio that deals with spiritual matters

A prison chaplain of 25 years has taken a look back on his extraordinary career. A former crook himself Reverand Rod Moore turned his life around and became a confidant – to some of Sydney's most notorious criminals. @AngieAsimus #prison #7News pic.twitter.com/ZdqXmoVgTU