Connect with your colleagues in prison ministry around the world.

I get the feeling that 2022 has been a difficult time for many prison chaplains all over the world as we struggle to cope with returning to something more like normal after COVID and the difficult situations it has caused in many prisons.

For many of us there’s been a lot of emotional and sometimes physical tiredness. I pray that in 2023 we’ll be able to get back to something approaching the kind of relationships we had before the pandemic, with opportunities to meet other chaplains – in our countries, in our regions, and looking forward to be able to meet across regions going forward. May God bless all of you; pray for IPCA as we think of each other in our different ministries in our different prisons. I wish you a very Happy New Year for 2023.

The International Prison Chaplains Association welcomes you to its Worldwide website. We exist to provide support and encouragement to prison chaplains everywhere, and to engage in advocacy on prison-related issues.

We invite you to visit the various pages and if you are a prison chaplain, to join us – membership is free. There are a number of ways you can connect with your colleagues in prison ministry around the world. You can also visit the websites run in our various regions worldwide.

As prison Chaplains around the world we share in this ministry together. If you have any suggestions for improving this website we welcome your ideas. Feel free to contact our President David Buick.

Since 2014, IPCA has had UN consultative status with ECOSOC, the UN Economic and Social Council, with official representatives at each major UN venue. You can read more about IPCA’s advocacy work with the UN in this section.

You are very welcome to apply to become a member of IPCA! If you’re a prison chaplain or involved in prison ministry, please contact us with details of your organisation and place of ministry, and we’ll forward this to the appropriate IPCA Region to verify your application. 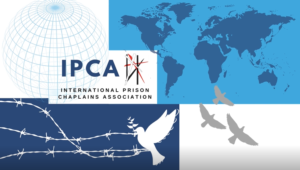 On 11 November 2020, IPCA held the closing event in its ‘Keep Hope Alive’ virtual symposium: a worldwide webinar that brought together prison chaplains from Nepal to Costa Rica via Australia and Norway. Chaired from Manila by IPCA Asia representative Gerry Bernabe, the meeting marked the conclusion of a series of virtual gatherings in each of IPCA Worldwide’s six regions (Africa, Asia, Europe, Latin America/Caribbean, North America, and Oceania).

Over 120 attendees followed the closing webinar, which is now available on YouTube. In addition to IPCA’s core community of Christian chaplains from different denominations, the symposium also welcomed chaplains of other faiths, including Muslim, Jewish, and Buddhist colleagues.

Keep Hope Alive was an opportunity for chaplains to share their stories of dealing with the impact of the Covid-19 pandemic on prisoners and on their own ministries. In the face of today’s extreme difficulties, participants were encouraged by the realisation that they were not alone. As one Scottish chaplain attending summed it up: “It was wonderful to be reminded that prison chaplaincy all around the world is essentially the same. We are one big family!”

In addition to grassroots feedback about prisons in the Covid-19 era, the symposium also highlighted IPCA’s role in global advocacy. IPCA’s new declaration on prisoners’ rights to spiritual care amid the health crisis was presented in each regional meeting before being formally adopted in the closing webinar. IPCA’s vice-president Jean-Didier Mboyo (DRC), who heads up the organisation’s UN Team, explained that as a recognised NGO, IPCA will now submit the document to the UN for official publication – and emphasised that individual chaplains can start using it right away: “each chaplain in their country’s prisons is the bearer of the declaration. You are the ones who can take it to your prisons, to your governments”.

The symposium also looked beyond the pandemic to consider wider concerns for prison chaplains: access to research, dealing with high reincarceration rates among indigenous peoples, and coping with violent extremism were just some of the topics raised during the various meetings.

“It’s great to have been able to reconnect with the prison chaplaincy community across the world despite travel restrictions”, said IPCA Worldwide President David Buick. “We now intend to build on that momentum to develop the IPCA community and provide the organisational resources needed for us to continue to keep hope alive.”